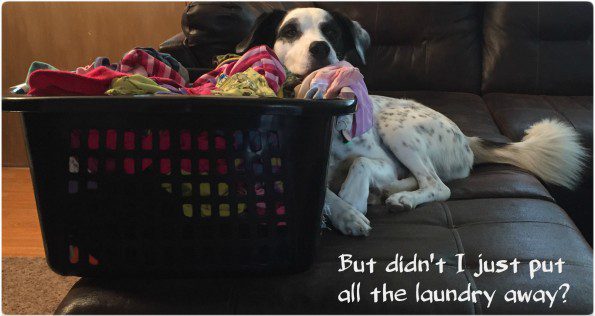 Another Cooper photo needing a caption. This is Cooper sitting on the sofa using the laundry basket to hold his head up. I don’t know, maybe he needed a pillow? I think he looks kind of tired. Maybe he is tired just thinking of putting all the laundry away yet again. Yes, doing the laundry is a never ending chore but much more practical than disposable clothing:). And this reminds me of ‘The Plan’ episode from Everybody Loves Raymond. The one when Robert asks Frank and Ray help him draft his and Amy’s wedding invitation and they convince Robert it would be best to botch the draft as a gift to Amy so she can do it herself. Their plan backfires when the draft is sent out instead of printed out for Amy’s approval. This leads Debra to conclude that Ray has been faking incompetence with folding laundry, changing diapers, making the bed, et cetera so she has to do it all. She says “Then explain to me how you can’t fold a shirt. Explain to me how an adult human with thumbs is not able to do that!”